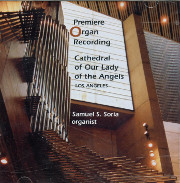 In this first CD on the organ completed in February 2003 for the new Cathedral of Our Lady of the Angeles in Los Angeles, California, by the Dobson Pipe Organ Builders of Lake City, Iowa, (several of whom are members of OHS) is played by cathedral organist Samuel S. Soria. The organ is featured on the cover of the The American Organist, April 2003, with an extensive article describing its creation.
VIERNE: Naïades, op. 55
REUBKE: Sonata on 94th Psalm
BACH: Prelude & Fugue in C, BWV 547
MESSIAEN: L’Ascension parts 2 & 3
HOWELLS: Psalm Preludes, Set 2/1