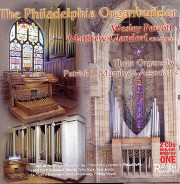 Organs by Patrick J. Murphy & Associates
2CDs for the Price of One!

This Philadelphia organbuilder presents two CDs to showcase three organs built by his firm in 1999, 2000, and 2003 and to showcase two of Philadelphia’s fine organists, Matthew Glandorf and Wesley Parrrott.

Murphy, a native of the Philadelphia area, was one of three recipients of the first OHS E. Power Biggs Fellowship in 1978 while he was in high school. He took a degree in organ performance from Ohio Wesleyan University and then apprenticed in organbuilding, founding Patrick J. Murphy & Associates in 1987.

The three organs are of moderate size, in differing acoustics, and feature new or entirely rebuilt mechanisms with a combination of new pipes and selectively recycled old pipes. The playing is superb.