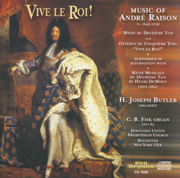 The 39-stop Fisk organ in Downtown Presbyterian Church, Rochester, New York was installed in 1983 as the C. B. Fisk firm’s opus 83. H. Joseph Butler employs the eclectic organ in alternation with choral performances of the chants of the mass. Though no longer sanctioned by the Roman Catholic Church, alternatim praxis was a part of liturgies for nearly five hundred years, ending in the early 20th century.

André Raison, Masses in the First and Second Tones