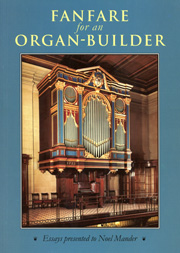 Fanfare for an Organ-Builder: Essays presented to Noel Mander

Fanfare for an Organ-Builder is composed of a group of essays in honor of Noel Mander. The contents include contributions by Christopher Dearnley, Ian Bell, Micahel Gillingham, The Work of N. P. Mander, Ltd., 1945-1983 by Nicholas Thistlethwaite; The Box of Whistles Story by Austin Niland; Attitudes to Old Organs in the British Isles by Stephen Bicknell; The 16th Century English Organ Repertoire Reviewed in Light of the Suffolk Fragments by Christopher Kent, An Elliot Organ in Boston by Barbara Owen, Early Chamber Organs of J. W. Walker by Nicholas Plumley; and Retrospect: An Extemporisation by B. B. Edmonds. 168 pages, 84 illustrations, softbound.