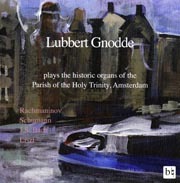 Lubbert Gnodde Plays the Historic Organs of the Parish of the Holy Trinity, Amsterdam

Lubert Gnodde was born in Urk, The Netherlands. He studied with Jacques van Oortmerssen at the conservatory in Amsterdam where he obtained his degrees in organ with honors. In 2000 he obtained two first prizes in the national organ competition of Leiden. In 2005 he won first prize with honors at the International Schnitger Organ Competition in Alkmaar, with an additional mention 'exceptional' for the second round. In 2007 he won first prize and audience prize in the International César Franck competition in Haarlem. He is currently the organist of the Cavaillé-Coll organ in the St. Augustinus Church in Amsterdam. Rachmaninoff - Prelude in g op. 32 no. 5 'Marche' Schumann - Seehs Stücke in kanonischer Form op.56 Bach - Canzona in d BWV 588 triosonata no. 5 in C BWV 529Wir glauben all an einen Gott BWV 740Liszt - Prelude and Fugue über B-A-C-H 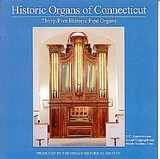 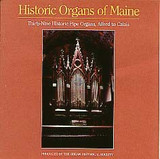