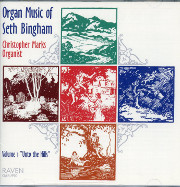 This CD is the first volume in an integral series of the organ works composed by New Yorker Seth Bingham (1882-1972), organist at Madison Avenue Presbyterian Church for 38 years and professor of composition at Columbia University. In his second CD on the Raven label, Christopher Marks plays the 1997 Schoenstein organ, op. 126, of 144 stops on four manuals with 110 ranks at First Plymouth Congregational Church, Lincoln, Nebraska.

This series of recordings has been made possible by the DCAGO Foundation, the University of Nebraska – Lincoln where Christopher Marks teaches, and Patricia Bingham Dale, the granddaughter of Seth Bingham. Two other granddaughters, Diana Bingham Earley and Rosalind Bingham Smith, and a great-grandson, Noah Albrecht, have aided with research and publicity.

Bingham’s music melds the French symphonic style and sometimes an orchestral transcription style with an American outlook and sensibility. His lifelong love of all things French (including his wife, whom he met in France) and his formative studies with Widor, Guilmant, and d’Indy infused much of his music with the harmonies, textures, forms, and registration choices that were typical of French composers like Vierne, Dupré, and Langlais. Yet there is an unmistakably American quality to much of his music as well— the occasional folk-like theme, jazz-influenced harmonies, and in his later music, a certain angularity and dissonance that was part of the mid-century American sound. The music chosen for this recording, generally, shows more of the French influence, but also incorporates styles from other countries and other times, resulting in a sound that is unique and charming.
The Pastoral Psalms were published in 1938, fairly early compared with much of his other published music but late enough that his compositional skills were already well honed. Bingham provided his own program notes in the music, quoted here:
1. Unto the Hills
“Who shall ascend into thy holy hill? – Rise up, my beloved, my fair one – I will lift up mine eyes unto the hills – The strength of the hills is His also – The hills are girded with joy.” (The Scriptures)
(The first theme is based on a vigorous recurring dotted rhythm; the second is a legato phrase with imitations. The two themes combine near the end.)

2. Forgotten Graves
Along the uplands of the back country, the winding road leads you to the abandoned farm, to the little country graveyard overgrown with myrtle. You loiter among the headstones worn by time and weather, peering at the half-obliterated epitaphs. Snatches of old and well-loved hymns are there: “Jesus, Lover of my Soul”; “Rock of Ages”; “Nearer, my God, to Thee.” Some dim elegiac tune haunts the memory. Here once was pulsing life, young and ardent. Now, only the hushed twitter of the birds and a melancholy stillness.

3. Black Cherries (Allegretto Amabile)
Over against the deserted farm-house stands the gnarled and long-neglected cherry-tree, visited only by the robins or the rare passerby. Do you remember climbing among its leafy branches, tasting the delicious fruit and tossing the dark clusters to eager waiting hands beneath?
(A lilting reed-melody interrupted by a capricious staccato section.)

4. Voice of the Tempest
From a high hill we watch the storm break over the distant town and roll sonorously up across the valley toward us. We seek shelter from the blinding flashes and the savage, lashing rain. With exultant fury the tempest roars out its song – then passes on with low receding thunder.
(The principal motive is heard in swiftly rushing scale-passages becoming rather chromatic at times.)

5. Beside Still Waters
“He leadeth me beside the still waters – Many waters cannot quench love – Thou art a fountain, a well of living waters.” (The Scriptures)
“This music crept by me upon the waters – This mossy bank they pressed; that aged oak did canopy the happy pair.” (Shakespeare)
(The eighth psalm-tune is used in canonic imitation against the smoothly-flowing first theme of alternating flutes and strings.)
In the Five Pieces, the Prelude and Fughetta in F is dedicated to French organist André Marchal. Its easily flowing lines and lyricism mask a deceivingly complex phrase structure, which is often the case in Bingham’s music. The “Agnus Dei” is a communion piece, more chant-like than most of his other music. The lush chords on the strings adopt an orchestral texture that shows up even further in “Night Sorrow.” “The God of Abraham Praise” is a simple but elegant reharmonization of the hymn tune Leoni. Bingham wrote and published it after the Five Pieces were originally released, and it was included in some later reprints of the sheet music for the Toccata on Leoni. “Night Sorrow” was originally an orchestra piece, later arranged for organ. Searle Wright wrote, “with the possible exception of ‘Night Sorrow,’ Bingham has published nothing for organ which is not thoroughly suited to the medium, which is not truly idiomatic—truly organistic.” “Night Sorrow” certainly will not succeed on many instruments, but on an orchestrally conceived instrument like the one on this recording, it shines and is perfectly idiomatic. “Bells of Riverside” is based on the carillon tune used to mark the hours at Riverside Church in New York City. An exciting piece, it develops an interesting variety of musical events from a simple carillon motive and deserves more recognition as part of the large repertory of organ “carillon” pieces.

Baroques is quite unlike anything else Bingham wrote in its single-minded use of the baroque style as a source of inspiration. The fact that he dedicated this suite to E. Power Biggs, a staunch champion of baroque music, is clearly consistent with this outlook. It is fascinating to hear the baroque sarabande recast in Bingham’s harmonic language and with his sense of lyrical melody, or the idea of the French classic basse et dessus de trompette turned into the “Rhythmic Trumpet.” The Overture evokes Bach and in particular, the dramatic unpredictability of pieces like the G Minor Fantasia. The Rondo Ostinato is an oddity that bears no superficial relationship to baroque form or style except in its compositional focus on the possibilities inherent in the four-note ostinato (in a similar vein to the passacaglia) and its strict use of canon in the second half of the piece. Too often, pieces with such high-minded compositional intent fall flat, but here is an exception. The Voluntary hearkens back to the English voluntary of composers like John Stanley, with its processional outer sections and fugal middle. Its pomp and majesty are appropriately “English,” though the harmonies and counterpoint seem more Mendelssohnian than baroque.

It is hard to imagine why the Variation Studies have largely escaped notice. This well-crafted set of variations on an original theme explores a staggering variety of styles, registrations, and textures. The piece was dedicated to Harold Gleason and “edited and fingered” by Catharine Crozier. Bingham’s trademark use of imitation and homage is abundantly evident: the “Embellishment” variation is clearly a chorale prelude in the vein of Bach’s Nun komm der Heiden Heiland; “Dialogue (Rests)” suggests Langlais, with whom Bingham was good friends; “Dissonance” is Bingham’s nod to Messiaen; and, finally, there is very nearly a direct quote from the Franck A Minor Choral at the end of the “Arpeggio“ variation. Yet, as with Baroques and others, there is no question of slavish imitation, but a clever incorporation of style and texture into an undeniably Bingham style that merges elements from various countries, composers, and eras. 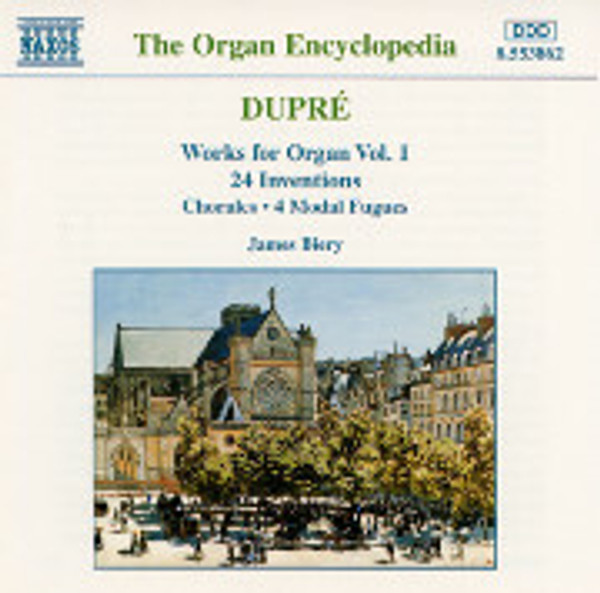 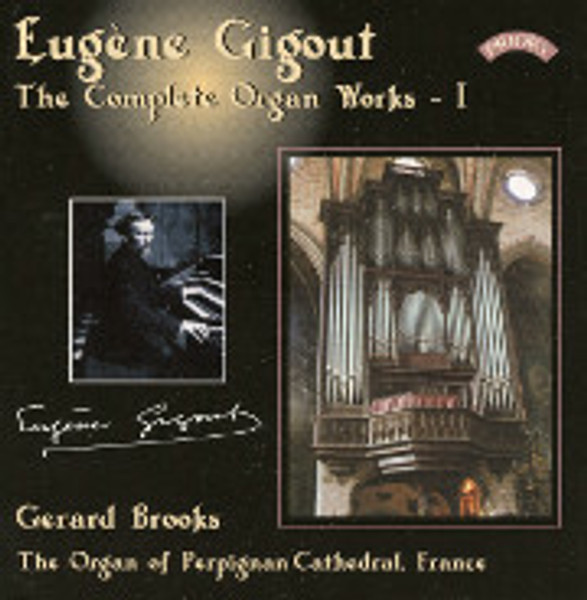 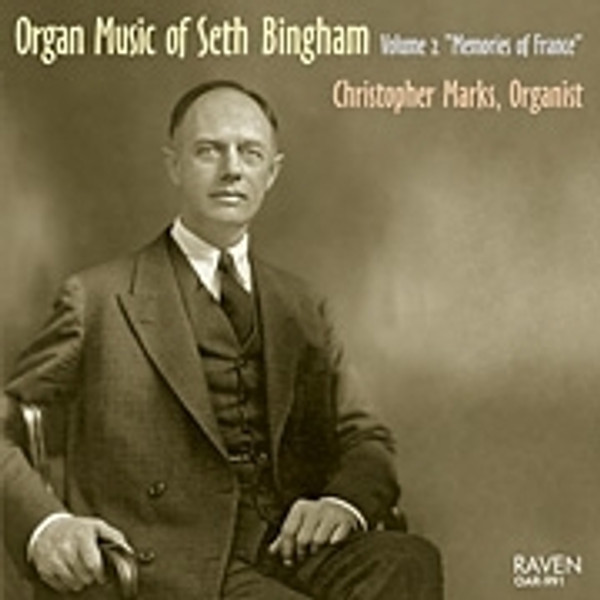 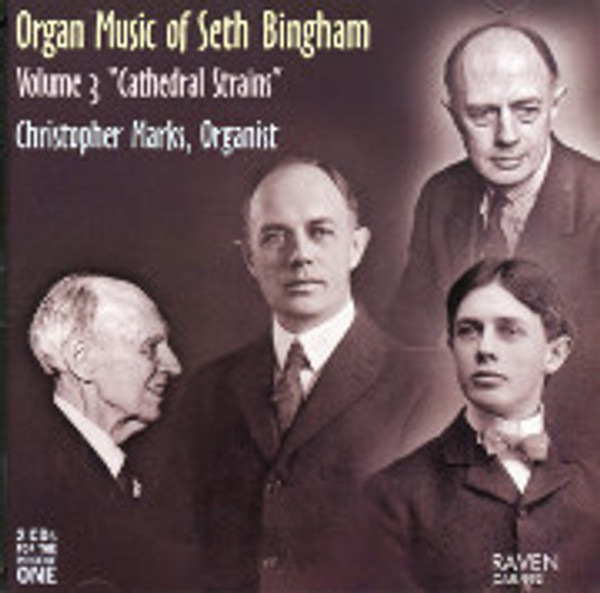