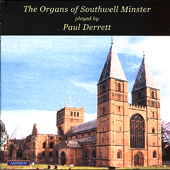 The Organs of Southwell Minster played by Paul Derrett

The Organs of Southwell Minster
Paul Hale M.A., F.R.C.O., A.R.C.M. was appointed to Southwell Minster in 1989. He had been Organ Scholar of New College, Oxford, Assistant Director of Music at Tonbridge School, and Assistant Organist of Rochester Cathedral. At Southwell, he inherited an instrument which had been rebuilt several times, each time failing to meet the demands made upon it adequately. A large instrument was provided by Bishop and Son in 1889, this was rebuilt with new casework and an additional Nave console in 1933 by Hill, Norman & Beard Ltd. and this in turn was drastically re-ordered in 1971. Quite apart from the age and unreliability of some of the mechanism, the critical factor was always that the Quire and the Nave are, in practice, two separate acoustic areas. Following on from the success of Hale's designs for the rebuilding of the Rochester Cathedral organ by N.P. Mander Ltd., and recognising his rare experience as an adviser upon other organ schemes (including practical experience as an organ-builder) the new Rector Chori was encouraged by the Dean and Chapter of Southwell Minster to approach the problem in a more radical way.
The solution was to be the provision of two organs, one in the Nave Triforium, the other (as historically) on the Screen, but built to speak one direction only, into the Quire. The total scheme (with its mass of innovative detail) confirms Paul Hale's vision as a designer and endorses the influence on the organ world which he has enjoyed nationally for some years as editor of Organists' Review. Following on from this success, he has been brought in to solve the problems in the rebuilding of a growing number of famous organs, among them St. Philip's Cathedral, Birmingham, Bridlington Priory, St. Margaret's Kings Lynn and Glasgow University Chapel.

The Nave Organ
The decision was taken to combine good housekeeping with conservation by re-using a large amount of worthy material, and it proved possible to re-use the better part of two organs by J.J. Binns of Leeds. The first had stood in the Upper Independent Chapel, Heckmondwike, Yorkshire since 1904, the other was built in 1924 for Waterbarn Baptist Church, Stacksteads, Lancashire. These were combined with a new three-manual console and a small amount of new pipework (marked *) by Philip Wood of Huddersfield who also carried out complete mechanical restoration and updating. Binns organs are always forthright, colourful affairs, most advantageous here, since the big Norman Nave at Southwell easily absorbs a lot of organ tone! The new nave organ occupies the first four bays of the south triforium and is only visible from the Nave floor if one is deliberately looking for it. A 16' octave of Open Wood pipes has been re-used from the Bishop organ of 1889 and the magnificent Hill, Norman & Beard Tuba of 1933 (speaking on a pressure of no less than 16") completes the picture. The organ was taken into use at Easter 1992. With its exciting sound and mobile console this instrument has proved superb both for Nave services and organ recitals.

The Screen Organ
The firm of Nicholson and Company of Malvern were chosen in 1994 to build a new four-manual organ, with the restriction imposed that this had to be contained within the existing screen case designed by Caroe and Partners in 1933. It is a miracle of planning! Both manual and pedal key action is mechanical (tracker) but electric coupling and stop action has been provided to facilitate easy control, since a cathedral organ has to be, above everything else, a fine accompanimental instrument. Once again, the opportunity was taken to re-use a good quantity of suitable old pipework which became available; this was rescued from a redundant Nicholson organ of 1868 which stood in St. Peter's Church, Malvern (now closed).

Note:
The (possibly controversial) decision was take to use modern electronic organ technology to supply 32' and Open Bass 16' voices. The organ does not rely on them in general use, but in practice they have proven valuable additions to the resources available while taking up little space within the old case. One may be a devoted enthusiast, totally committed to the pipe organ cause, but be open-minded as well! A control is provided at the screen console for the tuning of these stops to be adjusted occasionally to the remainder of the organ(s).
Programme notes & notes on the organs © Paul Derrett, May 2003
The organ histories above are drawn, with permission, from the booklet 'The Organs of Southwell Minster' by Paul Hale (1996) which contains a wealth of additional information and photographs which will be of interest to many readers. It is available from the Minster shop and welcome desk. Regular recital series are presented each year: the Nave organ is heard each Bank Holiday Monday and the Screen organ in celebrity evening concerts (with large-screen provision for audience enjoyment).
Further information may be had from The Minster's website: www.southwellminster.org.uk 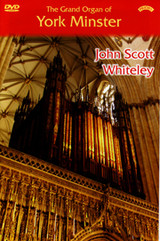 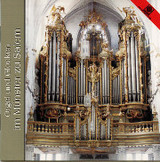 Organ and Bells of Salem Minster 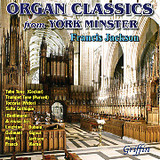