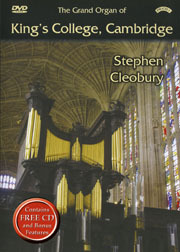 Stephen Cleobury guides a detailed tour of the King’s organ and demonstrates it with a fine recital of Bach, Howells, Gigout, Handel, Mendelssohn, Reger, Wesley, Thalben-Ball and Elgar.Stephen Cleobury, who has been Organist and Director of Music at King’s College for more than 25 years, is also the director of the famed choir of King’s which is heard world-wide in its annual broadcast of A Festival of Nine Lessons and Carols. The organ at King’s College dates from 1605-6 when Thomas Dallam built an organ for the chapel and the case, still standing and familiar to us, was likely put up. Successive rebuildings have been by Lancelot Pease, Thomas Thamar, Renatus Harris, John Avery and the Organbuilding firms of William Hill and Harrison & Harrison. Booklet notes included with the DVD include information about the visual presentation, as well as the musical content of the program. A stoplist of the organ as it is today is also provided. A CD version of the program is included as a bonus with the DVD. J. S. BACH: Prelude & Fugue in D, BWV 532; O mensch, bewein dein sünde gross, BWV 622 HOWELLS: Master Tallis’s Testament GIGOUT: Grand Choeur Dialogué REGER: Weihnachten HANDEL, Arr. Taylor: Arrival of the Queen of Sheba WESLEY: Air and Gavotte MENDELSSOHN: Sonata No. 3 in A, Op. 65 ELGAR, Arr. Brewer: Chanson De Matin THALBEN-BALL: Elegy WALTON, Arr. Murrill: Crown Imperial 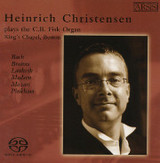 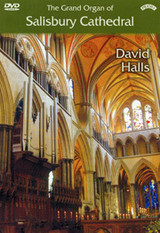 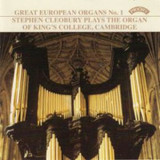